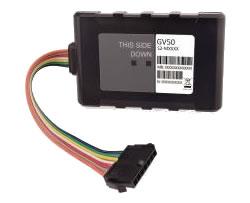 The Fleet Management GPS tracker Queclink GV50 can sent data through the (TCP, UDP, SMS) protocols, can communicate with mobile phones or controlled in real-time from a Tracking Management Platform always online. With GV50 GPS device of Queclink you can manage the following "Driving behaviour´s" when detect: harsh acceleration, harsh braking, harsh cornering. For "Driving control" the Queclink GV50 GPS tracker has the "crash detection" function, when GV50 detect a crash; start to save data for making the incident reconstruction or driving analysis. Receive from GV50 GPS device of Queclink the exact "Geo Location" on your mobile phone when GV50 device crossing a virtual geofence (up to 20 circular geofences, up to 20 polygonal geofences). In addition, you can configure the following SMS alerts on Queclink GV50 GPS tracker: (geofence, tow detection alarm, special alarm based on digital inputs), when one alert is active Queclink GV50 send a SMS message to your mobile phone.